Home / Blog / 2021 / Diagnosed as an Adult: My Journey to ACHA
By Monisha Mitchell

Diagnosed as an Adult: My Journey to ACHA 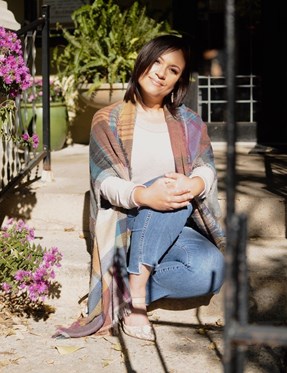 I often talk about the moment I was lying on a procedure table with my cardiologist in my heart. I have spoken about the moment the room stirred. I asked what was wrong and Dr. H said, “You have a very special heart.” My reply was, “I told you I am fearfully and wonderfully made.” However, I have not shared the details of the gut-wrenching events that followed, or my saving grace, until now.

Later that day, Dr. H entered my room in the Critical Care Unit of the local hospital. I knew when he walked into the room that it wasn’t good news. He had a look of empathy that in 30 years with doctors of all kinds, in all situations, I have never seen. He proceeded to try to explain the anatomy of my heart. He had to draw a picture. He was clearly walking on a tightrope. He wanted to accurately convey the risks without scaring me. He succeeded. Then I googled my condition…

I found no research about my condition. None. There were case studies. All the studies I found were postmortem (in dead people). My cardiologist recommended a specialist in congenital defects. In my home state of Indiana, I found one with the “congenital” in his title—but he was a pediatric congenital cardiothoracic surgeon. The risks began to sink in, and it definitely scared me.

The one good thing that came out of that terrifying Google search was the Adult Congenital Heart Association. It is an organization whose sole focus is people like me. My particular defect is extremely rare; it is found in less than 1% of the population and even within that 1%, there are variants. Yet somehow ACHA was able to link me with someone who also has an anomalous right coronary artery. I remember exactly where I was when I first spoke to her. I was driving and crying. I was not alone.

I also found an ACHD specialist on ACHA's website, as well as guidance about selecting a specialist. Some heart surgeons may assert that they can perform surgery on a congenital defect. However, traditional procedures like grafting can cause more harm than good in some instances. Since my defect is so rare, genuine specialists are rare. I opted for Mayo and saw a doctor whose work I followed. But had it not been for ACHA, I wouldn’t have even known what to look for.

In the nearly two years since I was diagnosed, I have gone to ACHA repeatedly for information and guidance. Last year, ACHA announced they are partners in a registry of adults with congenital heart defects, and even as I type this it brings tears to my eyes. It’s really hard to put into words what this means to me. Actually, the research may not be of any direct impact to me, but to know that future generations, even my own children, may benefit from the information this research uncovers means so much.

Monisha Mitchell was born with intramural interarterial anomalous right coronary artery. She had symptoms since she was a teenager, but her condition was not diagnosed until 2019. That year, she completed her first 5k and days later, experienced what she thought was a heart attack. Many doctors and tests later, and thanks to support and guidance from ACHA, she was appropriately diagnosed. She is monitored closely and medicated appropriately. Five biological relatives have died of heart related issues, so Monisha lives with a deep sense of gratitude. Monisha feels her race and gender impacted her care, so she wants to use her voice to empower women and people of color to advocate and to bring awareness to congenital conditions specifically and—more broadly—racial disparities in healthcare. Monisha has been a therapist and healthcare administrator for nearly 20 years. She lives in a small Midwest town with her two sons and close to her daughter and granddaughter.