Discovering CHD on a Soccer Field 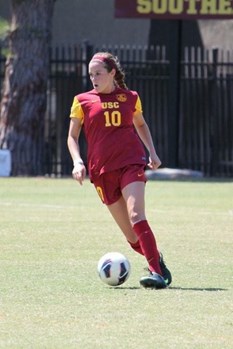 My name is Jordan Marada and I am a southern California native. At the early age of 4, my mother introduced me to a soccer ball after playing for many years herself.

Both of my parents helped coach my recreational soccer team before I was quickly recruited by a competitive club team at age 9. I played competitively from an early age and was continuously motivated by the passion and love for the sport, the friendships, and the dream I had of being a professional soccer player!

I was recruited and committed to play in college, where I began to peak in my career. During my Junior year at the University of Southern California in 2012-2013, our team wore heart rate monitors during daily training sessions. These quickly alerted my coaches and team doctors that there was something abnormal with my heart. My heart rate was ridiculously high for my fitness level and age. I was sent to the team cardiologist where I underwent multiple tests. Shortly after the testing, I was diagnosed with a bicuspid aortic valve.

The diagnosis did not slow me down one bit and my doctor was pleasantly surprised by how strong my heart was. I continued to play soccer and yearly check-ups were required to make sure there were no changes, as the bicuspid valve can begin to leak or become faulty or calcified.

After my 4-year college career and a healthy heart, I knew that was not the end of my soccer career! I was recruited by a professional club in the Czech Republic in 2016 where I played two seasons. My time in Europe was incredible—I met so many new friends and teammates and had the time of my life continuing to play the sport I love. 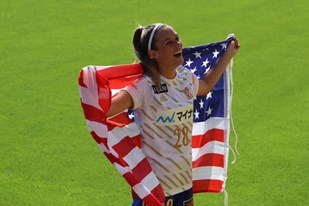 After my European adventure, I was extremely excited to play in my hometown of Orange County for a brand-new team, the LA Galaxy Orange County Women’s Team. In the summer of 2019, we won a National Championship in Calgary, Canada. During that incredible summer, I was approached by an agent who offered me a contract to play in Japan.

I was wrong after thinking my pro career was coming to an end. I was on a plane two weeks later heading to Japan where I scored the game-winning goal in my Japanese playing debut!

Although I have been blessed to play my sport without a serious injury for many years, I unfortunately ruptured my Achilles tendon during a training session upon my return home from Japan this past January. I underwent surgery that month, and I am continuing to recover well as I look forward to what is next in my career. 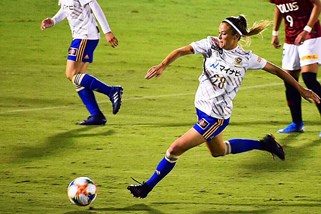 I am currently working for a professional men’s soccer team in Orange County, CA, called Cal United Strikers FC. I work as the team's Operations & Community Relations Manager and have been learning so much from the other side of the sport. I also enjoy mentoring and coaching young and upcoming athletes and encouraging them that no dream is too big!

After my diagnosis, there is no doubt that I have felt the stress, anxiety, and worry of knowing that I do not have a “normal” heart. I am thankful for the opportunity to share my story and look at my defect as a unique and special trait I carry with me.

My lasting words of encouragement: Attack each day with positivity, joy, and gratefulness! You can overcome any obstacle by viewing your “defect” as an opportunity for your strength to shine through. You are stronger than you think! 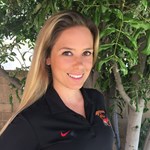 Jordan Marada, 28, was born and raised in Southern California. Growing up, along with her parents and brother Jake, Jordan did everything from water skiing, snow skiing, to motorcycle riding in the desert! She was diagnosed with a bicuspid aortic valve at age 20 while playing soccer at USC, a sport she is passionate about—Jordan’s grandfather and mother passed their love for soccer down to her at an early age. After her collegiate career at USC and her diagnosis not slowing Jordan down, she began her professional career in Europe. She played in the Czech Republic for two seasons and most recently played a season in the top women's league in Japan, where she scored the game-winning goal in her debut. Besides soccer, Jordan enjoys mentoring young athletes, working out, being at the beach, and spending time with her family and friends. Her aspiration is to strive in a career in athletics as well as continue her playing career.