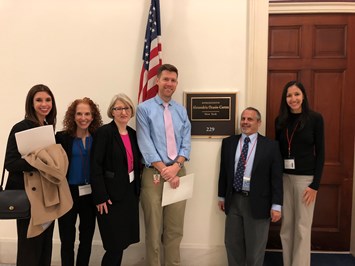 This year marked my third consecutive year going to Washington D.C. for the Congenital Heart Legislative Conference. To be honest, I almost didn't attend. The Congenital Heart Futures Reauthorization Act was just signed into law a few months earlier and I was debating if I really should go advocate.

I recently moved, still had stuff in boxes, and had more than enough going on at work. Frankly, I just wanted to use the couple of days I had scheduled out of the office to sleep in, hangout with my cat and unpack some of my belongings. The one thing that kept me from cancelling was that I had a newly elected Representative for my district and I knew it was important to start early with making a connection, so I showed up!

Having attended this event two other times, I thought I knew what to expect. However, the day on the Hill started out in an unusual fashion. Being the only constituent from my district, I got pulled aside and informed that the appointment with my Congresswoman, Representative Alexandria Ocasio-Cortez, was still "tentative." I was told unless I received a call with further instructions, to proceed with my team to the tentatively scheduled appointment and "try to get in." I was also informed that I shouldn't be surprised if my team doesn't get a meeting, as it was nearly impossible to get an appointment with Representative Ocasio-Cortez or a member of her staff.

Between the first two meetings of the morning, I received a voicemail informing me that a phone conversation had just taken place with one of the senior staff members in Representative Ocasio-Cortez's office. The appointment was still “not confirmed,” but it was advised that my team should stop by the office at the time listed on the schedule.

The outcome? We got in! Although we did not get to meet with Representative Ocasio-Cortez herself, we did get a brief meeting with one of her senior staff members. As it turns out, this staff member mentioned that one of his friends has a child with a heart defect. I am not sure how we got the meeting. Was it the phone call earlier in the day to the staff member we ended up meeting with, or that the staff member we met with knew someone with a CHD? Maybe it was both? I do know one thing, it would not have happened had we not shown up. 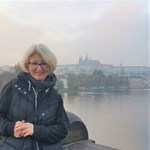 Darcie Farella was born with transposition of the great arteries, as well as a ventricular septal defect, and has undergone six open heart surgeries. Although she grew up in both California and Montana, she is happy to call New York City her home. When she is not working as an employment counselor, providing guidance to individuals going through career transition, she enjoys spending time with her boyfriend, Paul. Darcie is grateful for the opportunity to advocate for congenital heart defect (CHD) surveillance, research and awareness, in order to improve the lives of those living with CHDs.