Walk for 1 in 100 Spotlight: Villains With Heart 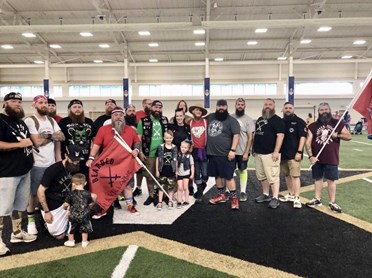 The Bearded Villains are a worldwide brotherhood of elite bearded men from all over the world who are dedicated to the beard, charity, family, respect, and loyalty. The Tennessee Chapter of the Bearded Villains, known as the Three Star Villains, was established in March 2015. With a brotherhood that spans around the United States and the world, the Three Star Villains learned of Villains in other parts of the country whose family and lives had been affected by congenital heart defects.

In 2017, members of the Tennessee chapter became social media friends with Renee Riege, a tetralogy of Fallot survivor and ACHD warrior. Renee was already working to raise money for the Nashville Congenital Heart Walk, when the Three Star Villains, under the leadership of Colin Little, asked if they could assist in raising money for the cause. In the spring of 2017, the Three Star Villains and Villains from surrounding states attended the Nashville walk to support Renee and other CHD and ACHD warriors and families.

The Villains always make their time raising awareness for this cause fun for everyone around them.  They have been the life of the party at the past walks in Nashville and work to make each year’s fundraising drive bigger and better than the previous year. They are excited to continue that tradition at ACHA’s new Walk for 1 in 100 this year in Nashville.

The Three Star Villains have their beard and mustache competition fundraiser scheduled for March 2, 2019, at the Crying Wolf in Nashville. Registration starts at 4 p.m. and the competition starts at 6 p.m. You are invited to join Renee, the Three Star Villains and members of this amazing organization from all over the country, as they help bring awareness to ACHD and its warriors.

Born with tetralogy of Fallot, Renee Riege is an ACHA supporter and volunteer involved with the Nashville Walk for 1 in 100 and past Congenital Heart Walks. Her walks team, Villains with Heart, is supported by the Three Star Villains, the Tennessee chapter of the Bearded Villains. Established in 2014 in Los Angeles, the mission statement for the Bearded Villains is “To unite bearded men of all cultures, races, creed and sexuality in a brotherhood devoted to loyalty, honor and respect toward all people, dedicated to the betterment of mankind through fraternity, charity and kindness.” There are Bearded Villain chapters in Germany, Canada, Greece, Netherlands, Australia, Mexico, 25 states in the United States, and all over the UK.