CHD: When You’re a Physician and a Patient

Everyone always jokes with doctors, “What happens if you get sick?” Some of us laugh off the question. But, I am a family medicine physician dealing with congenital heart disease (CHD). I was born with right ventricular hypoplasia, which means my right ventricle is just a small flap unable to adequately pump blood. The diagnosis of CHD for me meant multiple surgeries in my infancy followed by a lifetime of “being careful.”

Realistically, I’m lucky. I’m blessed with wonderful parents who happen to be doctors. Their comprehensive care of me as a child taught me how to take care of myself. They wanted me to have as normal of a life as I possibly could. With their focus on how to live with CHD, I was able to complete medical school, get married, and own my own home. This has made it easy to ignore my ominous heart condition; my life is, for the most part, is happy.

As a child, the seriousness of my condition almost never bothered me. My parents refrained from explaining the depth of my condition to me until I was a teenager, and even then, I barely understood it. I just knew I wasn’t allowed to freely participate in gym class and as I got older, I had to be more careful than others with alcohol. For the most part, these small things never interfered in my life.

Until the bad days.

In 2014, a young family member with CHD just dropped dead. I write this plainly because that’s exactly how it happened. The night before, he was totally fine, but in the morning, he was found in the bathroom. Unfortunately, cause of death can be difficult to determine in cases of CHD—maybe he wasn’t taking his medication, maybe he overdid it with exercise or alcohol.

For me, being in the doctor’s seat and the patient’s seat can be unsettling. I don’t pretend to be an expert; I am not a cardiologist. However, I know enough about the research to know that studies have only a small number of participants. Why, you ask?

There just aren’t that many of us out there participating in it. Only recently have doctors been able to do surgeries to repair congenital heart conditions. Do these surgeries hold out in the long term? We honestly don't always know.

As patients and as doctors, we have even more to deal with in terms of congenital heart disease and adulthood. What if these patients want a family? Can their hearts deal with the extra volume load pregnancy places on a woman’s body? Being both the patient and the doctor puts you at a strange impasse. Do I do what I want because I think my body can handle it or do I err on the side of caution because that’s what I would tell my patients to do? Truly, the answer is nonexistent.

At times, my husband will hear a story about someone with CHD dying suddenly. I can see on his face that it scares him, but he will say “Well, we don’t know if that person was really taking care of themselves.” It’s true, we don’t know, but I also feel we don’t know if any wellness guidelines are going to make the difference between my own life and death. That mortality is, for the most part, too much to bear. When my husband becomes worried, I want to comfort him, but my doctor side thinks that I should be preparing him. What kind of wife and doctor would I be if I didn’t tell him that I too could drop dead out of nowhere?

Individuals with CHD look like everyone else, so it’s hard to see us as different. I write this as a doctor, but also as a patient, to freely express my feelings and to remind others that if you suffer with CHD, you aren’t alone. It is my hope that the coming decades will bring more attention that will quiet the difficult questions of mortality in our different but beating hearts. 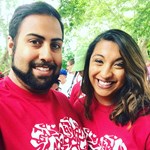 Sweta Shah, DO, was diagnosed with right ventricular hypoplasia at birth. She had the fenestrated Fontan operation in 1988. Sweta grew up in New Jersey and graduated from The College of New Jersey in 2010 and went on to Rowan University School of Medicine. She graduated from medical school in 2014 and began her career as a Family Medicine physician. Sweta continues to live in New Jersey with her husband, Ankit, their dog, Oliver, and their rabbit, Blue. Sweta hopes to grow her identity in the CHD community and would like to help others by sharing her unique situation as both a physician and a patient.