CHD and Finding “The One” 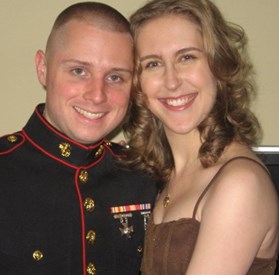 My husband, Chris, and I have been together 10 years and married almost seven. Some days I still can’t believe I found my soulmate and very best friend. I’m so grateful and blessed to have him in my life.

When I was born 31 years ago I was supposedly a healthy baby girl, but at 10 weeks old and in heart failure, I was diagnosed with complex congenital heart defects: tricuspid atresia, hypoplastic right ventricle, and ventricular septal defect. Medical technology to help save us complex CHDers was still so “new,” and my parents were living moment to moment never dreaming that 31 years later I would be happily married and living a wonderful full life despite all the challenges I have faced.

Finding love and getting married is something I always dreamed about growing up. When I became a young adult I worried it might not happen, as—let’s be honest—not everyone wants to sign up to be with someone with a chronic illness. Sure, when you get married in the vows you say “in sickness and in health,” but most never think about going into a relationship or marriage with “sickness” already there and always present.

My parents constantly reminded me “the one” was out there and would love me for me, CHD and all. When I was dating I was very open and up front about my CHD, as I didn’t want to waste my time or their time. I’m not going to lie; I got discouraged sometimes as most guys lost interest as soon as I told them about my heart. 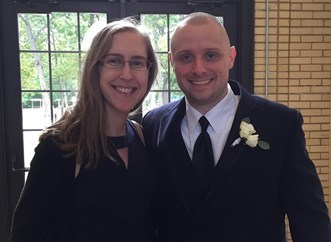 I kept positive and when I stopped looking, love ending up finding me. On Thanksgiving 2008 my dad called to tell me he had found a nice, handsome young man, named Chris, who went to my college and was willing to help me with the math class I was struggling in. I thought my dad was joking until Chris came on the phone asking if I was Frank’s daughter. We talked a few minutes then hung up.

Oddly enough, Chris was the nephew of my dad’s then girlfriend, yet we never exchanged numbers and I didn’t think much of what happened until days later when I received a message on Facebook from him. We wrote messages back and forth to each other for two weeks before meeting face to face on campus.

During the message stage, Chris wrote that my dad mentioned I had a heart condition. When I read that, I felt nervous that if I told him all about it that communication would end before we even met, but it didn’t. To my surprise, Chris actually googled stuff to learn more and said my CHD made me even more special.

We built a strong connection just through messages and when we finally met in person, I had a gut feeling that this guy might be “the one.” Well, I was right! We fell in love and are still going strong 10 years later. From the start, Chris jumped right into being a wonderful CHD partner from going to my cardiology checkups, asking questions, researching stuff, being attentive when I’m not feeling well, and so on. Chris and I even decided to marry a bit earlier than planned at the courthouse so I could have good health insurance since my mediocre college health insurance had expired because I graduated.

Chris truly is my rock, always making sure I’m well taken care of and always making me smile. I know he worries about me, yet tries to keep positive around me. CHD has always been part of my life, but it hasn’t for Chris, so I can’t imagine what goes through his mind watching me go through so much. Don’t get me wrong, marriage can be tough, especially with a chronic illness added, but with lots of love, communication, and working together—it can be so amazing.

Having Chris next to me on this CHD journey has made things more bearable and my life more enriched. To my fellow CHDers looking for love, don’t give up, as there are people out there who will love us and our special hearts unconditionally.

Lauren Bednarz, 31, was born with tricuspid atresia, hypoplastic right ventricle, and ventricular septal defect. She had a modified Fontan procedure in November 1989. Lauren grew up in Southeast Michigan, but currently lives in Central Texas with her husband, Chris. She graduated college with a BA in Psychology in 2011 and hopes to be a mom sometime in the near future. Lauren has been part of the amazing CHD community on and offline for over 11 years and was a co-chair for the Central Texas Congenital Heart Walk in 2016 and 2017. She enjoys couponing, deal hunting, writing, watching TV, being a CHD advocate, sharing her CHD story, and spending time with friends and family, especially her husband. Lauren has a CHD journey group on Facebook called: Lauren B- Adult CHDer/Fontaner with Tricuspid Atresia, HRHS, as well as a blog and Instagram: @laurenb_hopefulheart.