Let Me Introduce Myself...

Before I start, let me say it is a pleasure to meet you! Oh, I may not know you by name, but I am quite sure that we have a shared interest in congenital heart disease (CHD). Those are the people I enjoy meeting most, because CHD has become my passion. You see, I was born in small-town America to parents who had two sons and had lost one to hydrocephalus. So on July 8, 1960 when my parents were handed a healthy baby girl, you can imagine the excitement throughout both sides of my family. Who knew it would all change just two weeks later when I was diagnosed with CHD. Not a lot was known about CHD t

hen. The doctors sent me home, telling my parents I needed to get older and grow before there is anything we can do, voicing the distinct possibility that they would find me dead in my crib one day. But, by God’s grace, I lived to be three months old. At which time, I had my first Blalock Shunt with little chance of survival. And so goes my life from one miracle after another eventually being diagnosed with a double-inlet left ventricle, pulmonary atresia, chronic cyanosis. I have also developed pulmonary hypertension, which is pretty much under control with medication. I have now reached the ripe young age of 56. And as time goes on, I realize more and more how blessed my life has been.

My parents were always honest and open with me, my family and our friends about my CHD. It was never a secret and I always had the confidence of knowing that if something was wrong, they would tell me. I guess this is what led up to me being open and honest with my friends, the guys I dated, and eventually my husband and

daughter. My goal for raising my daughter is for her to have information without my heart problems becoming a negative part of her life. We discussed things honestly and openly, but tried to schedule check-ups and procedures during her time at school. (The same holds true for her adoption. She has always known she was adopted. The topic is always open for discussion.) People ask sometimes if my life is defined by my CHD. Honestly, today, I can answer yes, but for a much different reason than you might think. Other than my three heart surgeries and four of my bouts of endocarditis, my heart problems were minimal. Life went on day by day in what was “normal” for me. But in 2004, my cardiologist was very adamant that I attend the Adult Congenital Heart Association’s (ACHA) National Conference. She thought it would be good for me to meet others with CHD. (Up to this point I had met only one other person with CHD. It was a one-time blind date set up by my cardiologist…don’t go there!)

This ACHA conference forever changed my life. The feeling of walking into a room filled with people who had been through the same experiences that I had was absolutely incredible. My husband and I ch 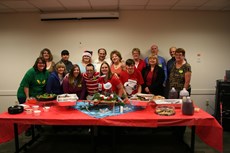 atted with everyone possible and I gained so much information that I brought back to Atlanta. As a result, I started an adult CHD group here, began volunteering for Camp Braveheart, and working with the local CHD hospital in any way I could help. One fall, the CHD hospital invited me to speak at their parent group meeting. I did so and mother’s stood in line to thank me for bring hope for their children. And it was then, that I knew a book would bring hope to so many more. And so in 2006, my book, about my life and experiences with CHD, was published. Over a 1,000 copies have been sold in at least seven countries. This is how, with my husband by my side, CHD defines my life because there is always work to do to help the next generation.

Kim Russell, who is also an ACHA Heart to Heart Ambassador, was born in 1960 with a double inlet single ventricle (left) with pulmonary atresia and chronic cyanosis. At three months she had her first Blalock–Taussig shunt and at age four, had another. Her final surgery was in 1992, at the age of 32. All along the CHD journey, she and her parents knew no one else with CHD. As Kim says, “No one else should to have to grow up or experience any CHD issues alone. We are all in this together!”