Home / Blog / 2016 / Introducing My Daughter to Advocacy
By Anne Gammon

Introducing My Daughter to Advocacy

Washing dishes at my sink Monday morning, it seemed hard to fathom that just a week ago I was in Washington, D.C., for the kick off to the 2016 Congenital Heart Legislative Conference. This was my fourth advocacy day, but it had been several years since I was last able to be present. Even more noteworthy, it was the first time I would attend with my daughter with congenital heart disease, Shay, age 15.

Well into the Monday morning sessions, I understood why the event’s name had been updated to Legislative Conference. Session speakers are experts in their respective fields and presentations covered a range of topics related to CHD: research, surveillance, and awareness. Training included an update on the current political climate, our goals and “ask” during meetings, and a reminder that advocacy is about building relationships with legislators.

While all of the medical and political information was important preparation for Tuesday’s meetings, the most significant presentations for my daughter and me were those from patients—adult and pediatric. Their words and leadership are the reason bringing my daughter to advocate for CHD was so important to me. Self-empowerment and championing the needs of those with CHD was the message, while their example was of thriving. For Shay especially, it was inspiring to hear a 14 year old with the same set of defects she has articulate his aspirations for the cause.

Looking around the room on Monday, what struck me was the number of children and teenagers attending the legislative conference. In the past, I had seen less than a handful of children at the event. But there were multiple families attending this year. Youth attendance has grown so much that for the past two years there has been a youth breakout session. Here my daughter was able to be with others who are young with CHD, plus practice and refine her message for legislators. 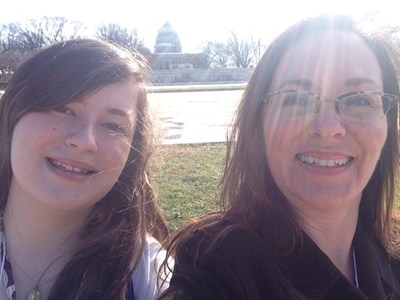 Tuesday at last came and the moment I had anticipated for years was finally here—Shay and I together would lobby for increased federal support of CHD research, surveillance and awareness. The significance of this is overwhelming on several levels. This is my daughter who I didn’t know if I would bring home from the hospital. This is my daughter who is shy. This is my daughter who, a week before, almost decided against making the trip to D.C. with me. Yet here we were, sharing our stories and perspectives of life with CHD.

Shay and I were joined in our group of advocates by a pediatric cardiologist, another parent, and an adult with CHD. Never have I been more proud of my daughter. It was awe-inspiring for me to watch Shay reveal her story to strangers. She declared that her motivation was to help all with CHD live longer and for those yet to be born with CHD to have access to better care through research.

Another incredible phenomenon to observe was the interaction among Shay, the adult with CHD and the legislative aides. Having a teenager and an adult present their narratives gave an outlook of life with CHD across decades. The aides were visibly touched and engaged by this approach. The parents and physician balanced this view with their own knowledge and experiences.

When my daughter was born in 2001, accurate information on congenital heart disease was scarce. Today, a Google search will pull up countless articles, support groups and studies. Without the dedication and cooperation among the pioneers of CHD advocacy, we wouldn’t be where we are today—seeking REauthorization of the Congenital Heart Futures Act.

Much remains to be done. If you have yet to take part in a legislative conference, I strongly encourage you to start saving today for 2017. More than one person commented to me that, until attending, they underestimated the power of the event. Lend your voice to the unified message, declaring that the need for federal support of congenital heart disease issues can no longer be ignored.

Anne Gammon, formerly of ACHA's Board of Directors, has been active within the congenital heart community since 2002. She has put her background in writing to work for several non-profit groups. In addition to serving on their boards, she also helped with the formation of two non-profits. After her youngest child was born in 2001 with hypoplastic left heart syndrome, Anne began working with the Congenital Heart Information Network and later with Palmetto Hearts. She participated in her first Advocacy Day in 2009. Hearing the stories of several adult CHD survivors impressed upon her the strong need for the message of lifelong care to reach parents of young CHD patients. Living in Myrtle Beach, South Carolina, Anne and her husband Bill have four children.