To the Starting Line!

Although I have not yet started the official training program for the half marathon, I’ve been going out for a few brief runs over the past couple weeks to start getting myself into the habit and routine of running. Truth be told, my pace is slow, my endurance is limited, and I don’t really love it—not yet, anyway.

To kick off my very first running season, I signed up for my first 5K race on May 12: Move for the Kids, which benefits the Ann & Robert H. Lurie Children’s Hospital of Chicago (formerly Children’s Memorial Hospital, where I had my one open heart surgery when I was eight months old). As exciting as this is for me personally, I didn’t even really plan it.

I’m on the staff Wellness Committee at work, and completely by random luck, the run/walk charity event that the committee decided to create a team for this year happened to be this one (I actually missed the committee meeting where it was discussed). The hospital is moving from its original home in Chicago’s Lincoln Park neighborhood to an expanded downtown location; the 5K race actually starts at the hospital’s original location and ends at its new site, with tours of the new facility being given immediately after the run.

Unlike many of those who will be running that day, I’m not trying to complete this race within a specific amount of time. I’ve run the same distance (albeit slowly) in my early training runs, and I know that I can do it. Personally, I’m using this event as a starting point—an initial benchmark—for my own half marathon training. The fact that this run—my first official race—benefits the hospital where I had the surgery that has allowed me to live a healthy and active live for over 31 years (so far) is just a very cool coincidence.

After talking with a couple friends who are avid runners, I’m not too worried about my slow start to the sport. One of them told me that just the fact that I’ve stuck with it for more than one or two training runs is a good sign. Another said that for a lot of runners, regardless of how conditioned they are, the first mile or so of any run isn’t all that fun. She said that the best part of running comes after you’ve gotten into it a bit and your body gets adjusted to the physical activity. You reach a point where you’ve built up your endurance and it’s almost as if you’re on automatic pilot. You’re still working hard, but you get into the “zone” and can just keep going much more easily.

I’ve definitely experienced the same thing with cycling, and there have been times on long-distance rides that—despite working hard—I have felt relaxed, focused, and able to endure much more than I thought I could. In those times, I have most certainly been in the “zone.” So while I don’t love running just yet, I’m looking forward to getting much more acquainted with the sport this year as I prepare for the half marathon in September. 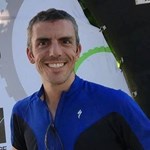