Pedaling the Pounds Off: Walk it Off

In the last segment of this series, It Takes a Long Time, I discussed that losing weight is not an overnight venture. Instead, it takes a long time to lose even the smallest amount of weight.

My experience is a perfect example: Though I was dieting and exercising consistently from the beginning of my second semester of freshman year through the end of my sophomore year of college, I could not break 240 pounds. As I approached summer vacation leading into junior year, I reflected on the progress I made the previous summer. If I dedicated all of my time to exercise and dieting and made tremendous progress during the previous summer, then there should be no reason to not break 240 pounds in the summer leading to junior year. But wow, was I wrong! 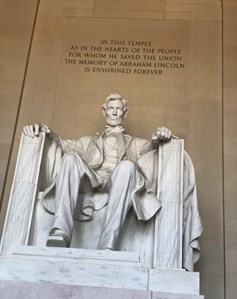 By May 2017, just before the semester wrapped up, I learned that I was moving to D.C. for the summer. And, I was moving there without my bike! Although this was a major success to cross off my career checklist, and moving to D.C. was a longtime dream come true, I believed I would strain my weight loss plans. I drove myself crazy trying to mentally balance how to eat healthily and maintain my low budget as a student in an expensive city.

By the end of May, I had my flights planned, I was moving into student housing on the Hill, and I was going to enter an amazing internship with the Faith and Politics Institute. All in all, I was very satisfied to make it to D.C., but the question still remained on how to spend as little as possible while also fulfilling a healthy lifestyle.

To budget well, I turned to Dave Ramsey and many other low-budget food articles. If I had to boil it down to two things, or, at least, the two things I followed well, it was these: do not let food go to waste and do not eat out.

At the grocery store, I bought food to last a week and no more. I ate the food in one week and then went to the grocery store every weekend. Perhaps the most difficult task of healthy food budgeting was that I only allowed myself to go to restaurants once every week and a half to two weeks. Socially, it wasn’t the best move, but financially, it was a killer move! Not to mention, it was a great way to steadily lose weight!

Even better, my newfound methods and D.C. lifestyle promoted exercise. I walked everywhere! I walked to the grocery store, my office, almost all social events and activities, and especially to D.C.’s monuments.

While D.C. has a bike sharing system, I found it better to walk. In fact, before D.C., cycling had become a chore. It was something I felt I had to do, not something I genuinely wanted to do. Walking made me realize that I began to enjoy cycling less and less because I was too focused on the number on the scale and not enough on the scenery and nature around me. 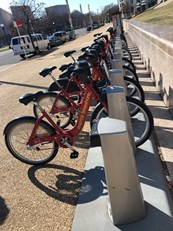 Of course, I love cycling. That is why I am writing this blog. However, sometimes it is good to take a walk. In fact, despite having a perfectly good, new bike now (and I will show that in the future), I took a long walk to the Lincoln Memorial the day I wrote this.

I bet you are wondering, though, did he lose any more weight? Yes! Yes, I did. After three months living in D.C., I finally broke 240 pounds. I returned to Mississippi as a 230-pound person, an accomplishment beyond my greatest expectations. Perhaps more important, though, I returned with two valuable lessons: (1) how to budget and (2) that riding a bike does not just have to be about losing weight.

Stay tuned for my next blog where I will discuss the few months after my return to Mississippi, how finally breaking 240 pounds gave me the confidence to lead an organization, and how my next venture in Jackson, Mississippi led to substantial weight loss.

Jared Gould was born with hypoplastic left heart syndrome (HLHS) in Grapevine, TX. He had four open heart surgeries: the first at four days old, the second at four months old, the third at two years old, and the fourth at three years old. After the fourth operation, Jared moved with his family to Ohio, where he lived until he moved his senior year of high school to Mississippi. After graduating high school, Jared attended college at the University of Southern Mississippi (USM). During college, he volunteered with the University of Mississippi Medical Center, where he spoke with patients and physicians about public heart health literacy and challenges he faced growing up with HLHS. After graduating from USM, Jared moved to Washington, D.C. to work on Capitol Hill. He hopes that his involvement with the CHD community and his life’s story will inspire others and help people through adversity.