Pedaling the Pounds Off: Back in Mississippi, Part 2 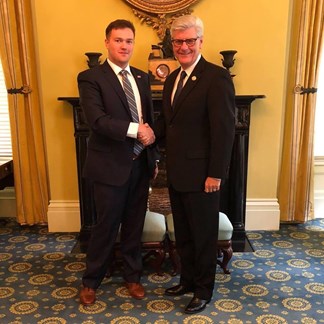 In Part 1, I discussed that losing weight instilled in me a sense of confidence that altered my body image, giving me the courage to lead an organization at the University of Southern Mississippi. At the end, I hinted that living out my goals was not yet over, but that I was also met with new challenges.

In May 2018, I would intern in Jackson, Mississippi, for Governor Phil Bryant. The challenge came a few weeks before moving to Jackson. My brother was seeking to get out of the house and asked me if he could use my bike. I said, “yes!” But, 25 minutes later I received a call from him asking me to pick him up.

A car coming around the corner startled him, causing him to wreck. While he luckily walked away with only a few minor injuries, the bike was severely damaged. I took it to the same store in Hattiesburg I purchased it from—the cost to fix it was almost as much as what I paid for it originally. So, I decided to sell it back to the store and put the money towards a road bike that I had been wanting.

At the time, I was working three jobs, so saving for a new, low-budget road bike would take only a few weeks. But, when I had the remaining money saved and got in my truck to head to the bike shop, the engine did not turn over. MY BATTERY DIED! After jump starting my truck in the driveway, I drove to the nearest auto shop, where I learned that my new battery would be nearly $500, almost half of what I stored away to purchase a new road bike.

By June, the internship was in full swing and I was without a paying job. So, the remaining savings I had needed to be preserved for rent, gas, and groceries. And, unlike D.C., I could not walk to keep active. I was not living in a safe location and I felt very uncomfortable walking on trails alone. Yet, my internship experience, even in its early days, changed my outlook on how I should handle my predicament.

My internship was AMAZING! It was not just the work I enjoyed. It was the people I worked with that I enjoyed the most and who motivated me to seek alternatives. Of course, I do not mean that anyone told me, “Hey, Jared. It really sucks you do not have a bike, but you should seek alternatives to losing weight.” That did not happen. I do mean this: The people I worked with were so motivated, passionate, and hardworking that I felt motivated to not let multiple obstacles keep me from improving my life.

For me, this meant that not having a bike or great access to walk, did not mean that I was justified in foregoing exercise. Rather, it meant that as much I hated it, I could attend a gym. Using the money I had for gas, I drove every other day for an hour and a half to a YMCA. I was fortunate enough that my family had a YMCA membership and I was not charged for using the gym.

My exercise routine gave me a lot of energy during the day, made me tired enough to fall asleep easily at night, and, over time, I learned to even make my drives to and from the gym productive by listening to podcasts and books. More surprisingly, the weight came off in waves. Before I knew it, I was 215 pounds.

With that, another lesson was learned: Weight is more easily lost when you surround yourself with passionate, hardworking people. For me, the biggest contributor to weight loss was not a gym routine, a cycling routine, or dieting. Losing weight was easiest when I surrounded myself with highly motivated people who inspired me to do better. And, the lesson did not end there.

I also learned that dedication in my personal life contributed to greater dedication in my professional life. I believe, without a doubt, that had I been nearly 300 pounds entering my senior year, my internships in D.C. and Jackson would have been out of sight.

Stay tuned for my final blog where I will wrap up my weight loss story. Finally, if you have not already, please visit my Facebook fundraising page and consider making a tax deductible donation to Walk for 1 in 100 campaign.

Jared Gould was born with hypoplastic left heart syndrome (HLHS) in Grapevine, TX. He had four open heart surgeries: the first at four days old, the second at four months old, the third at two years old, and the fourth at three years old. After the fourth operation, Jared moved with his family to Ohio, where he lived until he moved his senior year of high school to Mississippi. After graduating high school, Jared attended college at the University of Southern Mississippi (USM). During college, he volunteered with the University of Mississippi Medical Center, where he spoke with patients and physicians about public heart health literacy and challenges he faced growing up with HLHS. After graduating from USM, Jared moved to Washington, D.C. to work on Capitol Hill. He hopes that his involvement with the CHD community and his life’s story will inspire others and help people through adversity.