Home / Blog / 2019 / Pedaling the Pounds Off: The Learning Curve
By Jared Gould

Pedaling the Pounds Off: The Learning Curve

In my first post, I discussed my life struggle with weight. Going into my second semester of freshman year, I was nearly 300 pounds. Thinking I was on the verge of having a heart attack or developing diabetes, I made a decision to lose weight through cycling.

For an entire semester, I followed a strict routine. Every Monday, Wednesday, and Friday, I rode a hybrid fitness bike (seen in the first post) between 20-45 minutes and, on the weekends, I went on a two-hour ride with a friend.

I ended the last post with this question: How much weight did I lose?

Well, I lost 15 pounds. While family and friends told me it was a great accomplishment, I was disappointed. Yes, I lost 15 pounds, but I was still wearing a size 38 pant and an extra large t-shirt. I asked myself, how could it be, that even after an entire semester’s worth of exercise, I was still wearing the same size clothes and was still closer to 300 pounds than 200? Could I ever lose a substantial amount of weight? Was it possible to get out of a size 38?

Thankfully, summer was near! And with more days available for exercise, I had hope that I could accomplish more. I not only kicked up my exercise routine by cycling more often, but also by cycling for longer durations of time, even during rainstorms. Yet, that summer something even more valuable happened to me: I accepted a job as server at a local seafood restaurant.

A week into the job, I became acquainted with the head cook, KC. KC had a passion for cooking and an even bigger passion for talking about it. After sharing with him my weight loss goals and my passion for cycling, he shared with me easy recipes I could make at home. 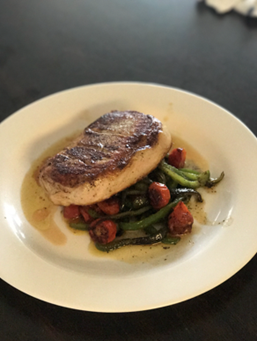 As a college student, I was spending ungodly amounts of money on takeout and eating extremely late at night. I thought, maybe cooking will be cheaper and provide me a better opportunity to eat earlier in the day. Thus, in hopes of saving money and not craving food when I returned home late from work, I ran with KC’s advice. Soon, I was regularly in the kitchen baking chicken, roasting potatoes, grilling steaks, or sautéing broccoli. Roughly two months into it, I was hooked! Not only did I save money and come home full, I also started cooking for the entire family.

Most surprisingly, however, my size 38, the size I wore since early high school and what become unbearably snug by the end of the previous semester, started to feel loose. Not to mention, my cycling speed increased, my tolerance became stronger, the weight on my chest was lifted, and I was nearing closer to what I weighed when I graduated high school.

The subtitle of this post is The Learning Curve because, though cycling helped me lose weight, I had to learn that, for me, there is more to a healthy life than exercise. As a great ER physician from Sherman, Texas once told me, “Even excessive, daily exercise will not help your bad diet.” When I quit eating late at night and cooked my own food, cycling was noticeably easier. I traveled longer distances, rarely settled for breathers, and had the energy to go faster, which made me fall in love with cycling even more.

Thus, I knew losing more weight was a possibility. Yet, it was not an easy road.

Be on the lookout for my next post, where I will discuss my two-year long struggle in breaking 240 pounds and how I learned to balance cycling, eating, and work.

Jared Gould was born with hypoplastic left heart syndrome in Grapevine, TX. He had four open heart surgeries: the first at four days old, the second at four months old, the third at two years old, and the fourth at three years old. After his operations, Jared moved with his family to Ohio, where he lived until he was 17. He moved his senior year of high school to Mississippi, where he attended the University of Southern Mississippi (USM). During college, Jared volunteered with the University of Mississippi Medical Center, where he spoke with patients and physicians about public heart health literacy. He graduated from USM in May 2019 with a Bachelor of Arts in History. Currently, he is back in D.C. working for the Faith and Politics Institute, a nonpartisan organization on The Hill where he also interned in college. Jared hopes to return to Mississippi, a place he is deeply passionate for. His mission: Keep Mississippi moving forward.