Home / Blog / 2018 / Miss West Virginia: The Paradox of My CHD
By Madeline Collins

Miss West Virginia: The Paradox of My CHD 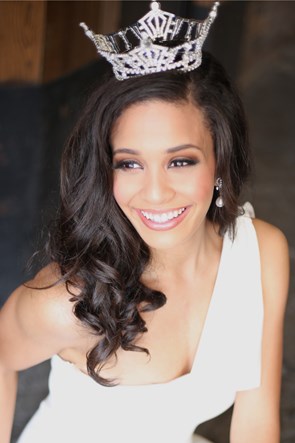 For as long as I can remember, I have felt that my heart condition was a paradox in my life, an inconvenient reality that did not match my body or spirit. A dancer since the age of two, I have spent most of my life on a stage asking for attention, yet wanting the scars of my surgeries never to be noticed. I wanted to stand out during every performance while always hoping that no one noticed when I fatigued quicker than my fellow dancers, or that my coloring was fading to pale by the end of a piece. When I was told by my primary cardiologist that I needed to be safe in choosing activities and hobbies, I proceeded to join the track team in middle school, always hiding the monitor I was forced to wear as a compromise made with my very frustrated cardiologist.

Following my third and most recent open heart surgery, I experienced a conversion of sorts. It was the first time that I had witnessed a decline in my physical condition, with my activity tolerance reaching a miserable low. The final weeks preparing for this surgery presented another new experience for me. While I was scared of the impending pain and anxious for the weeks of school absences, moreover, I was facing my own mortality for the first time—the prospect that I could actually die as a result of this nuisance in my life named tetralogy of Fallot.

Six months after my surgery and recovery, I returned to the stage in one of the most challenging and rewarding dances performances of my life. That experience served as an internalized personal statement for me, both physically and emotionally. This “condition” that I had viewed as a contradiction in my life, seemingly an assault on everything I believed that I was, I now welcomed and embraced as one of the most defining truths of myself. It is one of my most powerful strengths, rather than a symbol of weakness that I had tried to hide for so long.

When I made the decision to enter my first Miss America competition two years ago, I knew that the scars along my chest would be on full display and that there has never been a Miss America with such a degree of visible imperfections. While I believe that most judges would not knowingly hold this against me, I also know that my body is sometimes not pleasant to view; I represent chronic illness, I represent less than perfection, I represent mortality.

My relationship with my heart condition has evolved from being a hidden sign of weakness to a proud representation of my resilience and strength. I love nothing more than meeting young children with congenital heart defects, comparing our diagnoses, surgical histories, physical limitations, and our matching “zippers” while always demonstrating my own pride and lack of shame in mine. And as I compete at the Miss America competition in September, I will confidently and proudly represent them and our lives of ongoing paradox.

Madeline Collins was diagnosed with tetralogy of Fallot at birth. She graduated from West Virginia University summa cum laude with a degree in Child Development and Family Studies. She is employed as a performer and dancer with the Walt Disney World Corporation in Orlando, Florida. Madeline is a very active volunteer with the Children's Miracle Network and Give Kids the World Village located in Orlando. In Fall 2019, Madeline will begin graduate school at Columbia University in New York City, after her year of service at Miss West Virginia 2018 is over, and after competing for the title of Miss America 2019 in September 2018.