Cardio is Hardio: Running With CHD 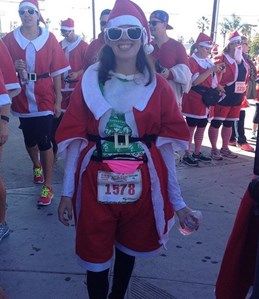 How I became a runner after many years of cardiologists telling me I “can’t” run still amazes me. I was born with hypoplastic left heart syndrome and had three open heart surgeries by the time I was one. I was always told I should do some sort of cardio but running is a no-go (“can’t” lift anything over my head and definitely “can’t” run a mile for gym class).

All that changed December 12, 2015, when I decided to run my “first” 5k with some friends at the San Diego Running Co.'s Santa Run. A 5k is 3.1 miles. I just wanted a chance to prove to myself that I “can” run and would be able to. I had a talk with my previous cardiologist and said I wanted to try to run one. He approved and sent me on my way.

Race day was here. I ran around the corner and stopped. I could not go on any longer. All of my friends who were runners—and some non-runners—sped past me. I was alone, dressed up in a Sunny Santa Suit, along with 1,000 others. I felt hopeless and defeated until a friend ran back to walk with me. I finished and felt better after crossing the finish line. Yes, I could most certainly walk 3.1 miles. A 5k. But could I run it? I was determined.

‘Twas the end of 2016 and I was now friends with lots of runners, volunteering with running event companies, and more involved in the running community in general. I decided to make my New Year’s Resolution to run one 5k. I started training with Couch to 5k (C25k) on my phone. I disciplined myself to follow my workouts for the week. I also decided to register for my first and second 5k races of 2017.

C to… what? C25k is an app that builds you up over the course of eight weeks to run your first 5k. It has you work out three days a week for 30 to 40 minutes each day. It starts with a 5-minute walking warm-up. Then you alternate 60 seconds of jogging with 90 seconds of walking for 20 minutes. You finish with a 5-minute cool down period. It really helped me get started with just doing some cardio for 30 minutes. If you are wanting to try something new, have an open and honest conversation with your ACHD doctor to come up with a plan. When I asked my cardiologist what he thought, he said I am able to do half marathons and marathons.

Finally, the Coronado Valentine's Day 5k was here. I was anxious, terrified, excited and scared all at the same time. I wore a big red tutu so I could be easily spotted by my friend in case we were separated. I found my friend and we walked over to the race corrals. A corral is the time or pace you can run at. We started towards middle/back of the pack. I looked over at my friend and just start crying.

Was I really going to do this? Was I really about to run my very first 5k that I actually trained for?!

Whistle blows and we're off! It started off in the grass, which I was not trained on or prepared for. We were jogging and walking. I came in at 45 minutes and 27.80 seconds. I got a nice medal to show myself that I CAN do this. My friend asked me how I felt and I asked, “when’s the next one?” I was HOOKED! That race was the start of my running career.

Until next time, future runners… 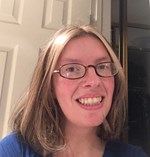 Annie Kaftor was diagnosed with hypoplastic left heart syndrome at birth. She had the Norwood procedure on December 14, 1988, at just six weeks old. She then had the Glenn shunt, followed by the modified Fontan procedures, by the time she was 18 months. Annie grew up in Hastings-on-Hudson, NY, and graduated Westchester Community College with a certificate in Early Childhood Education. She loves taking care of babies as a nanny just as much as she loves running races. Annie will be running her first half marathon in April 2019. She hopes to inspire other CHD patients to achieve their goals. Annie now lives in San Diego.