The Face of CHD

Where is our Michael J. Fox? What he’s done for Parkinson’s is amazing and commendable. He’s personalized the disease for so many out there who aren’t familiar with it. He’s owned his disease with such honor and respect.

After watching Kat Edorsson’s moving speech at the Survivor final tribal counsel (which you can watch by clicking here) I thought she would be a great adult CHD spokesperson. I started lobbying her—some may call it stalking, but I’ll stick with lobbying—via twitter and Facebook to seize her reality TV celebrity status and get involved in CHD advocacy. Come on, she was on a show called Survivor, how perfect is that? I’ve yet to get a response from her.

Shaun White is a CHD celebrity favorite of mine—not only because he also has tetralogy of Fallot but because he’s the flipping flying tomato! He swept the Olympics and is a huge inspiration to many CHDers on how to defy the odds and live life to the fullest. I know he could rock the world with his CHD advocacy.

There’s a whole other list of celebrities with CHD including The Office and The Hangover’s Ed Helms, MMA fighter Mark Miller, ESPN commentator and former linebacker Tedy Bruschi, Backstreet Boy Brian Littrell, and singer Jessie J—just to name a few. There’s also many other celebrities who either have a child or family member with CHD.

We need a champion—someone who is willing to devote his or her time and energy to becoming the face of CHD. Obviously, someone who is already in the public eye will bring about greater awareness to those who don’t know CHD in their lives.

We have many AMAZING advocates who are not celebrities to the general public, but definitely celebrities in the CHD community. I love you all, you’re inspiring and fierce!

So, basically, we need to either convince one of these ready-made celebrities to grab the CHD reins and become our spokesperson, or we need to make one of our amazing CHD advocates famous!

Who’s up for the job?

Note from ACHA: We, as well as other CHD organizations, continue to work to identify a spokesperson in an ongoing manner. If you have any resources to share regarding a spokesperson, please let us know. Thanks! 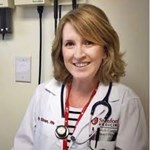 Christy Sillman was born with tetralogy of Fallot with pulmonary atresia. She is a wife, mother, writer, and a nurse coordinator at the Adult Congenital Heart Program at Stanford. Christy recently graduated from UCSF as an acute care nurse practitioner and will be starting as an ACHD nurse practitioner in the Sutter Sacramento ACHD program in April 2020. She is passionate about educating, advocating, and advancing the field of adult congenital heart care.